What is Democratic Leadership?

The Democratic Leadership Style in Action

Before going any further, it is important to point out that there are conceptual differences between authority and leadership. The former is formalized power that is conferred on a person to engage in particular activities sanctioned by an institution or individual who has the power to be authoritative. For example, in a case where an individual is elected to a public office, the citizens of the state effectively conferred on that individual the power of representation. In an organizational structure, certain powers are conferred on the CEO of the company by a board of directors to implement board policies. However, leadership can be considered as the power possessed by an individual, who influences the action and belief of others. Formal authority may or may not be possessed by a leader and an individual who has authority may or may not occupy a leadership position. In essence, leadership is a behavior and not an office or position held by an individual. Democratic principles are used to manage the democratic leadership approach. These principles include deliberation, inclusiveness, equal participation and self-determination. The democratic leadership style is characterized by the three features outlined below:

A democratic leader will delegate responsibility among members of his or her team to facilitate member participation in making decisions.

It is incumbent on leaders to empower their team members in order that the members will be properly equipped to accomplish their tasks. Included in the process of empowerment is the provision of the education and training required for the completion of delegated tasks.

A significant role played by the democratic leader is ensuring that democratic deliberation takes place when group decisions are being made. This indicates that the leader is supposed to serve as a mediator and facilitator between members of the group, make sure that the members are psychologically well and there is a respectful environment at all times.

Similar to every other style of leadership, there are advantages and disadvantages of democratic leadership. Some of these benefits and drawbacks are outlined below:

Democratic leaders are typically excellent at solving complex issues. They have the ability to work collaboratively, using a consensus of opinions to get things done the right way. The democratic leader often thinks innovatively and encourages others to do the same, so that solutions to complex and strategic problems can be found.

Solutions that are democratically derived generally last for the longest period of time. The democratic process ensures that the solution is reviewed on a continuous basis. Additionally, engaging team members will enable leaders to maintain effective processes that fit the business well. Democratic leaders ensure that team members work well with other individuals, so that they are suitable to function in large corporate environments in which co-operation and communication are crucial.

Team members under democratic leadership tend to be supportive and strong. Honesty flourishes and more collective working is done because the opinions of everyone are taken into consideration. Democratic leaders are usually popular within the organization.

Democratic leaders effectively foster creative environments since they encourage the input and innovation of team members. Creative designers succeed under democratic leadership because of the support and nurture that is embodied in this leadership approach.

Democratic leadership can sometimes come across as being indecisive. In certain situations, especially during a crisis, leaders must be very directive and democratic leaders do not function well in an authoritarian role. In the midst of a crisis, no time is usually available to address everyone concerned. 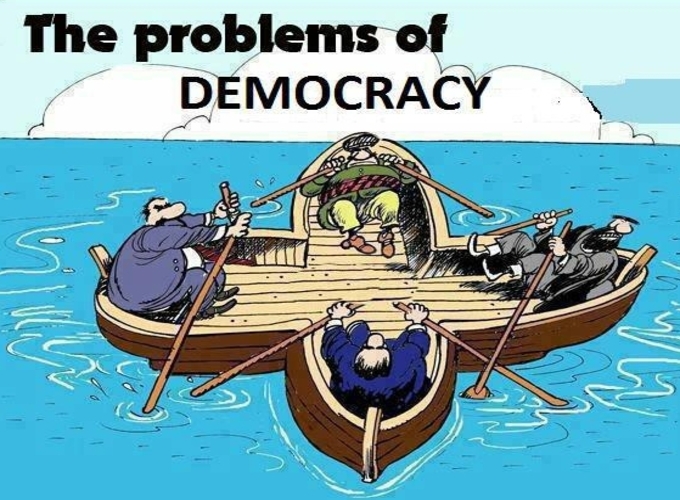 The consultation process could result in procrastination. If an organization has a project or issue that is urgent, democratic leaders cannot usually work to the timescales required. It takes time to talk to a number of individuals and collect a variety of opinions and many democratic leaders find it difficult to cut corners.

Democrat leaders sometimes build an environment in which individuals expect for their idea to be implemented. Where there are a variety of solutions in a particular project, only one can be implemented and democratic leaders will have to invest time in apologizing and smoothing things over with individuals whose ideas were not used.

Democratic leadership style examples include Dwight D, Eisenhower, who was a military leader faced with the challenge of getting the Alliance forces to be in agreement on a common line of attack. He put in hard labor to ensure that there was a united front, so that a common understanding could be reached. This is considered one of his greatest accomplishments as a leader.