The Great Escape is a film that shows teamwork displayed in a drastically different situation, and proves that teamwork is about more than sports, our jobs, or even our families. Teamwork also expands across generations, and can also be born out of extremely dire circumstances. A film about a planned escape from a German prisoner of war (POW) camp by Allied prisoners during World War II. The Great Escape illustrates just how far people will go and to what extent they will work together when faced with adversity. 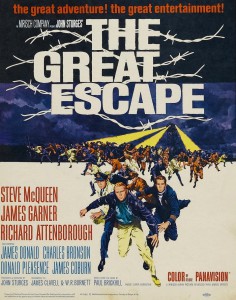 After the Germans recaptured Allied POWs, they moved the prisoners to a new, higher-security POW camp with the intent of keeping them where they were and deterring them from escaping. In fact, one of the Colonels at the camp emphatically states that “There would be no escapes from the camp.” The Colonel again reiterates the tighter security, and even offers perks to the prisoners for NOT attempting to escape. This was actually the first example of teamwork in the film, grim though it was. In order to come to an agreement on the new camp’s design and security features and move the POWs to the new facility, the German commanders had to work together in order to accomplish their goal.

Quite understandably, there were plenty of POWs at the camp who did not want to stay put, no matter how rich the perks were. And here is where the film presented its second example of teamwork.