The Latin translation for the word “Invictus” is “unconquered” or “undefeated”. A fitting title, because it exemplifies what is possible even in the face of adversity. Invictus, a biographical drama about the series of events in the nation of South Africa before and during the Rugby World Cup in 1995, highlighted the ongoing racial tension of that time. 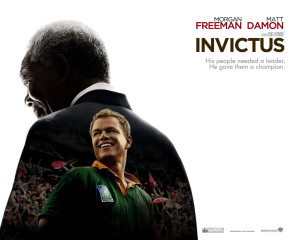 Although this period in history was shortly after apartheid was dismantled, it was still an extremely tumultuous time. The film focuses primarily on the relationship and interaction between Nelson Mandela (South African President) and Francois Pienaar (captain of the Springboks, South Africa’s rugby team).

President Mandela, who was also in attendance at this game, was not surprised that the players of the South African Springboks were mostly white, which the black spectators felt went hand-in-hand with apartheid and prejudice. Because South Africa was going to be the host of the Rugby World Cup in 1995 (the following year), Mandela spearheaded a meeting with the South African Sports Committee, a group dominated with black members, to support the Springboks. Mandela also meets with Francois Pienaar (the team’s captain) and expresses how a win by the Springboks would help to unite South Africa.

Although of course there were people — both black and white — who disagreed with them. Mandela and Pienaar held on to their beliefs and worked together to attempt to change the minds and way of thinking of the people. This was the first example of teamwork in this film. If Mandela and Pienaar had not come to some type of meeting of the minds, gained a mutual respect for each other and agreed to work together, their plan would not have been able to move forward.

In addition to the teamwork between Mandela and Pienaar, teamwork also existed between Pienaar and his players, and not just during the games. It was required that they unite OFF of the field as well as on the field. The players began to pay special attention to the fans, interact with them, and form a bond with them. This resulted in the team gaining more fan support, and by the time of the start of the second game of the World Cup, the entire country had come together to support not only the Springboks, but the effort of Nelson Mandela. Finally, teamwork was also apparent within the citizens of South Africa.

As mentioned previously, the post-apartheid era was still a very volatile time, with tensions and emotions still running high. By taking heed to Nelson Mandela’s philosophy and his words, specifically regarding the support of their rugby team, South Africa’s people realized that they had to come together as well in order to truly move forward. The people learned that they were truly strongest when they worked together as one towards a common goal. In this case, the common goal was their support of their team, who ultimately went on to victory against a very tough New Zealand team. It was also a victory for the people of South Africa, who learned that working together for the common good will win over negativity and persecution every time.