Coach Carter isn’t just another cliché sports movie because it’s based on a true story and sends powerful messages about dealing with the roadblocks life throws at us, perseverance, and teamwork. 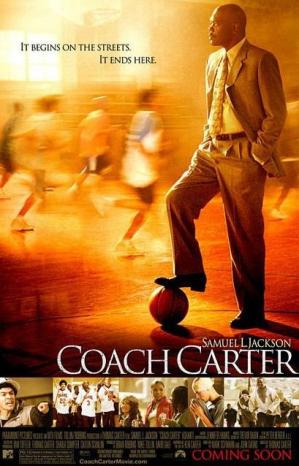 Coach Ken Carter, who assumes the head coaching position for the Richmond High School Oilers basketball team, immediately notices that the players on the team are disrespectful, rude, undisciplined, and are doing poorly in their classes. The Coach is disappointed and sets out to change things right away.

The Coach calls a team meeting, gives each player a contract which stated that they had to wear ties and dress shirts on days when they had games, refer to everyone as “sir”, and maintain a minimum of a 2.3 grade point average while attending all of their classes. He also introduced a new coaching style to them, which included an increased amount of discipline, conditioning, and execution.

Not surprisingly, these changes were met with resistance from the players, parents, and even school board members for various reasons. Team members also dealt with individual adversities such as family tragedies and teenage pregnancy. Eventually, after a confrontation between the Coach and the school board over a lockout due to continued poor grades, the team surprises Coach Carter by organizing work study sessions set up in—of all places—the gymnasium. The players improve their study habits, raise their grade point averages, and end up eligible to compete in the regional playoffs. Although they lose that game, the players and Coach Carter are happy that they accomplished a goal that many thought they would not achieve: good grades and a superior basketball team.

Although there were many “teamwork themes” through this film, there is one that stands out:

One of the players struggles with exercises, required by the coach, to rejoin the team. When he does not meet the requirements and Coach Carter tells him to leave, one of his teammates comes forward and says that he’ll do the pushups for him. The teammate tells Coach Carter that if they’re truly a team, if one person struggles, they all struggle, so therefore it’s his duty to help him out. Eventually the rest of the team joins him and they’re all doing pushups for their teammate.

This scene stood out for two reasons: