Thirteen Days is definitely the most serious of the films about teamwork discussed here, as it is about the events surrounding the 1962 Cuban Missile Crisis. Told from the viewpoint of United States political leaders, Thirteen Days, although a dramatization, shows just how close the United States came to a third, and extremely deadly, World War. 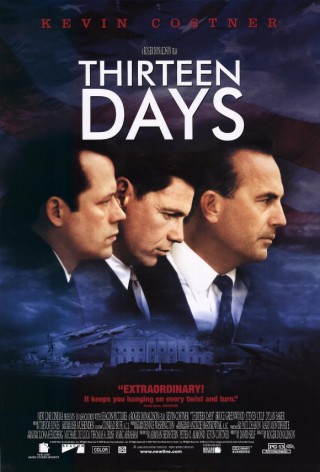 The story begins in autumn of 1962, when U.S. surveillance pictures show that the Soviet Union is in the beginning stages of positioning nuclear missiles on Cuban soil. President John F.Kennedy, with the help of his close advisers, set out to devise a detailed plan to prevent these missiles from being launched. It is President Kennedy’s intention to prove that the United States will absolutely not tolerate a nuclear threat of any kind.

Although a few people in President Kennedy’s Cabinet, including the Joint Chiefs of Staff, suggest that the United States military should strike immediately and invade Cuba, Kennedy resists, fearing that quick military action would have dire ramifications, which would include the Soviet Union invading Berlin. Such an invasion could have certainly led to a World War. Kennedy did not want to use a blockade either (barriers to prevent more weapons from entering Cuba), as a blockade is considered to be a formal act of war. It was Kennedy’s desire to find a more subdued—yet still calculated and firm—resolution.

After much debate and consideration, Kennedy and his Cabinet eventually agree on a quarantine, where forces from the United States Navy would stop ships from entering Cuban waters, inspect them for weapons, and clear them for continued passage. In response, the Soviet Union eventually offers to remove the Cuban missiles if the United States would promise never to invade Cuba.

The Crisis continued on and included more “back and forth” proposals and even a few security decisions performed without President Kennedy’s knowledge. Soon after, President Kennedy authorizes strikes on the missiles and an occupation of Cuba. As a result, a U.S. reconnaissance plane sent over Cuba in preparation is shot down, and the pilot is killed. This death appeared to be the final straw, and the United States wanted a resolution immediately. The President sends his brother, Robert, to meet with the Soviet Union’s ambassador, to reinforce the United States’ request (DEMAND) to remove the missiles and in turn, the U.S. would promise not to invade Cuban soil. After additional debate, the Soviet Union agrees to remove their missiles, and a war like no other was averted.

Although this was a serious and intense film, teamwork themes were found in the following scenes: