Although the premise of Apollo 13 is based on an actual event in our great history in space travel, it is also one of the scariest. The film expertly plays out that fateful day back in April of 1970 when, on the second day into their mission, one of their oxygen tanks exploded, and another one failed. The result of this was three “stranded” astronauts careening around the moon with very little power and no heat. What would you have done in this situation? Regardless of your plan—considering the fact that there were three people involved—it had better involve lots of teamwork. 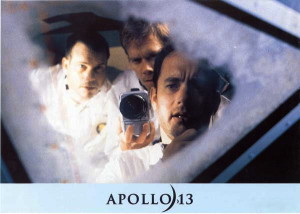 As the three astronauts dealt with the challenges before them – one of the first being adapting to all three of them working within the tight space of the lunar module, which was only designed for two men – teamwork was required at the very start. They needed to work together from the lunar module before they returned to the command module for their return to Earth. (Although it’s nothing like being in space, could you imagine riding on a bicycle built for two, but with THREE people instead? How would you work that out? Whatever the outcome, you had BETTER work as a team or you’d get nowhere!) Saving the Apollo 13 mission, and also their LIVES, became a top priority, so the astronauts’ spirit of teamwork became center stage right away.

Ground control also had an immediate, huge task. They had to work together to completely rewrite new navigation procedures and test them to ensure their viability before they could communicate them to the stranded crew. The mission’s Flight Director had to make changes at a second’s notice, and nervously scribbled everything into the flight log. As portrayed in the movie, this incredible feat required that ground control staff write the new procedures in an unprecedented three days, instead of three months. That is another example of unbelievable teamwork.

In history and also in the movie the Apollo 13 mission is known as a “successful failure”. This is because although it never made it to the moon, the success ended up overshadowing everything because everyone worked together in instance after instance of incredible teamwork to save the crew. Not only did the three astronauts work together as a team, but hundreds and hundreds of Mission Control personnel worked together and never gave up in order to guide them safely back to Earth.

Any cookies that may not be particularly necessary for the website to function and is used specifically to collect user personal data via analytics, ads, other embedded contents are termed as non-necessary cookies. It is mandatory to procure user consent prior to running these cookies on your website.