Glory, based on historical fact, is the story of the 54th Volunteer Infantry in Massachusetts. The story is told from the perspective of Robert Shaw, a White Commanding Officer, during the Civil War. This story was immediately unique because the 54th Infantry, with the exception of the Officers, was completely made up of African-American men. 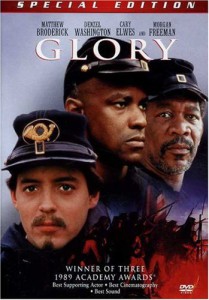 Not surprisingly, racism reared its ugly head on numerous occasions in the form of violence and discrimination on the part of the White officers towards the African-American Infantry soldiers. Robert Shaw was unique in that, unlike his other White colleagues, he had the desire and intention of training his African-American Infantry soldiers fairly and to fight with a relentless spirit in the Civil War. Collectively, they wanted to rally against the injustices bestowed upon them and prove themselves to their comrades and to the other Commanding Officers.

This intention between Robert Shaw and his Infantry men was the first example of teamwork in this film:

Overall, although this film was about racism, war, and the associated ravages of both, it is also about camaraderie, friendship, determination, courage, and of course teamwork.