Facing the Giants is a Christian dramatic film that tells an underdog story about football from a Christian/religious worldview. (Interesting fact about this film: the supporting cast was comprised entirely of volunteers and members from Sherwood Baptist Church in Albany, Georgia.) 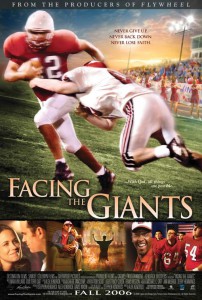 This film centers on Grant Taylor, the head coach of Shiloh Christian Academy who, in six years, has not posted a winning record. When the seventh seasons starts off with a loss in the first three games, the fathers of the players start voicing their concerns and demand that the coach be replaced with Brady Owens, the defensive coordinator. On top of his troubles at work, Coach Taylor is also having financial problems and there is also trouble in his household because he and his wife are unable to conceive a child, and Coach Taylor discovers that he is the reason why his wife cannot get pregnant. This was truly a case of “when it rains, it pours”.

Despite his troubles, Coach Taylor devises a new philosophy towards coaching his team and makes a decision to give praise to God, regardless of the result and what is going on around him. Additionally, Coach Taylor persuades his players, through positive thinking and guidance, to give their all-out effort every time, and he also encourages them to trust God and believe that through God’s guidance, they could be winners.

The team only loses one game for the remainder of the football season, and eventually they advance to the state championship game. Even though their opponent, the Richland Giants, had almost three times as many players, they unite like never before in the championship game, and amazingly they win the game as the result of a 51-yard field goal. What made the winning field goal even more amazing is that it was kicked by a backup player who had never kicked a field goal longer than 35 yards.

In addition to winning the state championship game, Coach Taylor and his family received a blessing from God. The family’s prayers for children were answered—after a couple of years, he and his wife had children.

The teamwork theme is evident in this film in a couple of ways:

No matter the type of film, the message of teamwork will always be a valuable one and will be accompanied by lessons that everyone can learn something from.