Everything You Need To Know About Tribal Leadership

What is Tribal Leadership

In their book, “Tribal Leadership,” authors David Logan and John King argue that “tribes” are the most powerful units in any organization. These tribes, the authors claim, wield greater organizational power and influence than an organization’s CEO. A tribe, according to David and John, is a tribe is a naturally occurring group of between 20 and 150 people who share a unique tribal culture. A typical large organization has five levels of tribes. For an organization to succeed, the authors argue, it must rise to the fifth tribal level, the “life is great” stage. To achieve this goal, the organization would need to adopt a management strategy called tribal leadership. Below is some more information on this topic.

A Detailed Look at Tribal Leadership

To do this, you would need a culture-based strategy that would allow you to leverage the naturally occurring groups in your organization. This is particularly important because, in a typical organization, culture is more important than strategy. In fact, according to John king and David Logan, conventional business strategies such as massive cultural changes, gimmicks and incentives have a relatively low success rate of about 30%. Tribal leadership is a culture-based management strategy that would enable you to move your employees through the five stages of tribes more effectively, transforming them from adequate to outstanding employees. Tribal leadership does this by encouraging employees in lower stages to use the language of the next higher stage. Additionally, tribal leadership tends to focus on one tribe member at a time rather than the entire tribe at once.

The five tribal leadership stages include: 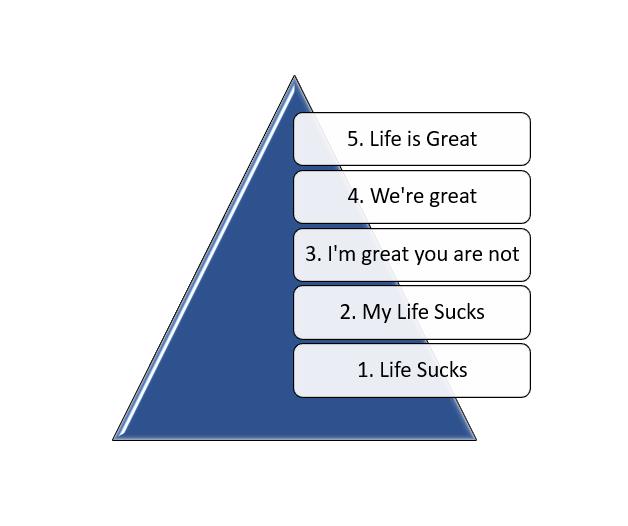 Stage one — This is the lowest level of tribal development. The common theme at this stage is “life sucks.” Stage one tribes generally believe that life is inherently unfair and hopeless. People in this stage tend to be socially withdrawn, associating with only like-minded individuals. As a result, this stage produces people who do horrible things. It is literally the culture of gangs and prisons. Only about two percent of tribes exist at this level. Thankfully, most professionals skip this stage.

Stage two — The common theme at this level is “my life sucks.” Stage two tribes generally consist of well-behaved professionals. However, they lack connections and believe they cannot succeed because they are not valued. Stage two tribes tend to blame the tribes above them for their failures. As a result, they do just enough at the workplace to retain their jobs. About 25% of tribes found at this level and these tribes exist even in the some of the best organizations in the world.

Stage three — Although the mantra here is “I’m great,” the unspoken part is “you’re not.” Nearly 50% of workplace tribes occur at this level. Stage three tribes often consist of two- person relationships (dyads). Tribe members are generally smart and understand the value of leveraging the skills and expertise of other people to achieve a goal. However, tribe members tend to be individual-centric nature, meaning they like to dominate and control others. However, a leader can move from stage three to stage four by encouraging members to work together and ultimately, build networks, especially triadic networks.

Stage four — The tribal mantra at this stage is “we’re great.” At this level, tribe members unite around value and hold each other accountable as they work together to defeat the competition. Tribal leaders at the level work to build and develop triadic relationships by two people who do not know each other together based on shared values. In case a conflict arises, the leader of the tribe would encourage the parties involved to resolve the conflict by themselves. Tribe members exchange information freely through the network, allowing the tribe to be more productive, adaptive and creative. About 22% of tribes are found at this level.

Stage five — Enjoyed by only 2% of workplace tribes, this is the final stage in tribal leadership. The common theme at this stage is “life is great.” Tribes move from stage four to five when they embark on a history-making project.

Everything You Need To Know About Tribal Leadership Changing an organization’s culture can be difficult because in most organizations, culture is more important than strategy. In fact, conventional strategies such as massive cultural changes, gimmicks and initiatives only work about 30% of the time, according to John King and David. The most effective of changing your organization’s culture is to leverage the naturally occurring groups in your organization. These groups are called workplace tribes and consist of between 20 and 150 members. You can employ tribal leadership, a culture-based strategy, to achieve this goal.